Killed in Burma
Promising Barnsley Swimmer
A feeling of deep regret will be felt in Barnsley at the news that Brian Martin (24), second son of Mr James Martin, 2 Harvey Street, Barnsley has been killed in action during March in Burma. Brian joined the Army at the outbreak of war in the "Under 20's". Enlisting in the K.O.Y.L.I. he soon rose to the rank of Corporal. On transfer to the R.A.C. he was offered, but refused, a commission, as he wished to get on an overseas draft and resigned his rank.
A well-known scholar of Holy Rood and Longcar Central he will best be remembered as a swimmer of promise. Captain of Longcar Central he helped to win many trophies for that school. Brain swam Squadron for Barnsley Swimming Club and assisted in many polo matches. Employed at Cundy Cross Branch he had held the Co-op Championship Trophy since 1936. He has two brothers, Denis and James D. Martin, serving with the R.A.F. and is a nephew of Mr W. Martin, President of the B.B.C.S. Ltd.

" I know Brian was promoted first to Lance Corporal and then to Corporal and once or twice after that when he transferred to the RAC he was again promoted to Lance corporal and then demoted again.  Brian was a rebel and I'm sure he preferred being one of the lads. I remember being taken before the war to watch him play in a Co-op water polo match against Wakefield Police at Barnsley Baths. Brian had fouled the Police a few times and kept being sent out of the pool to sit on the side. It was at the end of the match when both teams were swimming to the sides that the Police made a concerted attack on Brian, ducking him several times. Brian broke surface grinning from ear to ear and called out "Help. Police!" The spectators roared with laughter. I have the silver Championship trophy cup that you mention."

Brian's father received a letter from the wife of the second in command of the Regiment who was responsible for next of kin welfare and it is produced in part below, with thanks to Pat.

"At Kadojeik, 2 tanks of no. 6 Troop were ambushed by Japanese infantry. Tpr Martin was driving the leading tank. It's armour was penetrated by an anti tank grenade fired at very close range, and the tank caught fire; all the crew evacuated. Meanwhile Lt Lothian, who commanded the other tank tried to manoeuvre in to a position from which he could cover them. But in doing so, his own tank was penetrated by a second grenade and he himself severely wounded. Ammunition in the evacuated tank started to explode and the crew, including Tpr Martin ran for our own lines. Some were killed immediately but Tpr Martin, fatally wounded managed to reach the forward infantry. He died in the F.A.P."  (our note: F.A.P. = First Aid Post)

Pat also says;
"The account differs from what I was told at the time. Sometime after Brian's death I remember being told that a soldier who had been in the same unit as Brian visited my Dad and told him that Brian was driving a tank with the 'lid' up. This was strictly against the rules but in the jungle the inside of a tank became like a pressure cooker and leaving the 'lid' up was common practice. He said that a Japanese soldier who was hiding up a tree threw a hand grenade into the tank and the rest of his story agreed with the official statement. I can't see why the soldier would have made the story up but I can see that the official statement would have been more politically correct."

Brian is remembered on the family gravestone in Barnsley cemetery which is inscribed with the words,
MOST SACRED HEART OF JESUS
HAVE MERCY ON THE SOULS OF
SHEILA MARY MARTIN
DIED JANUARY 18TH 1926
BERTHA MARTIN
DIED MAY 19TH 1937
BRIAN MARTIN
KILLED IN ACTION 1939-1945
JAMES MARTIN
DIED MARCH 31ST 1963
R.I.P. 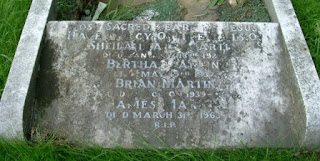 KingstoneHistory
I was born into a family with close ties to the Parish of St Edward's, Barnsley going back four generations. My grandfather's brother, George Henry Fretwell, is named on the St Edward's Church WW1 memorial tablet as one of those who died in the Great War. My grandfather Joseph Fretwell was luckier and returned home from the trenches, albeit without his legs. I was honoured to be asked if I would research the lives of the other men named on the tablet, and was humbled by the bravery and sacrifice that I discovered. The book "Kingstone Remembers the Great War 1914-1918" details the lives of the men and their families. Research on the St Edward's WW2 men is being done jointly with James Corbett from St Edward's Church and I am also collecting information about other men in the area with the intention of creating a Kingstone Roll of Honour, and displaying their stories on this website. I would be delighted to hear from you if you would like to know more about the men listed here, or to buy the book, or if you would like me to add information about your own relative. Please contact me at kingstonehistory@gmail.com